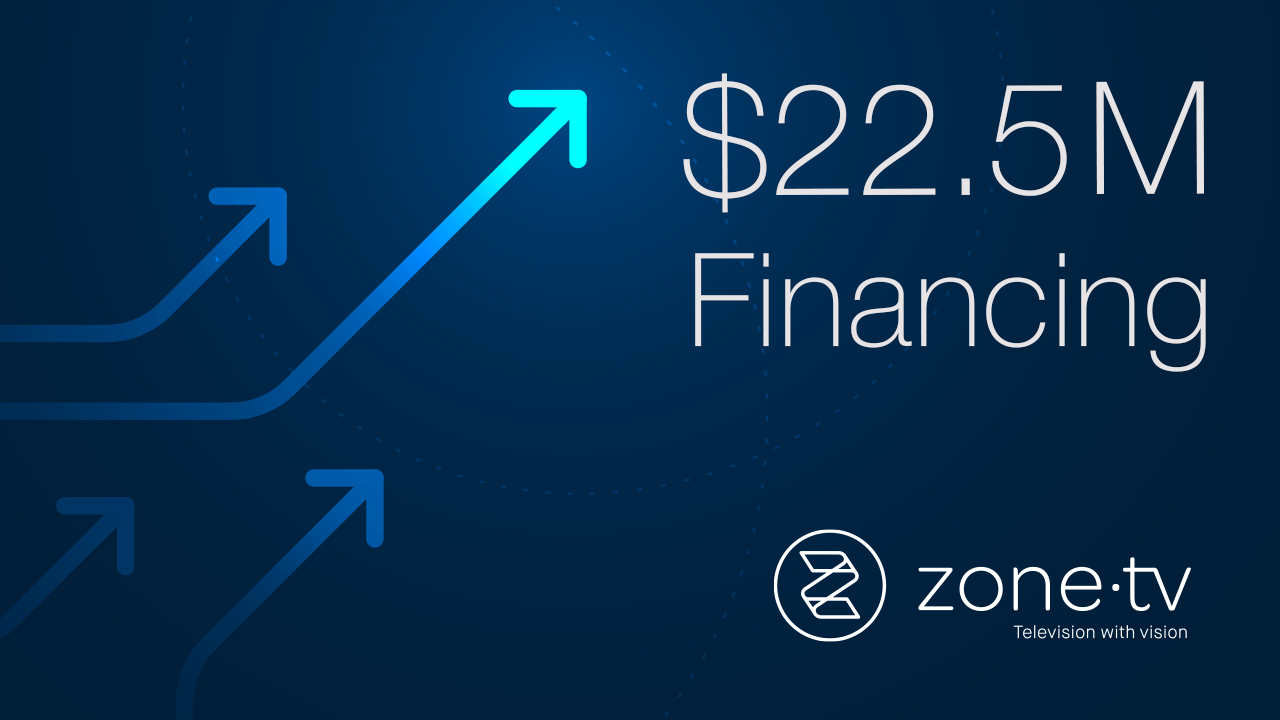 The investment will accelerate the company’s growth in its world class interactive experiences, Ingage and its Ad-supported Streaming Service, Zone·ify

TORONTO, ONTARIO, CANADA, October 11, 2022 /EINPresswire.com/ — ES3™ and its subsidiary company Zone·tv, are pleased to announce the closing of $22.5 million of new capital to accelerate the company’s growth in interactive and Free, Ad-supported Streaming TV (FAST). The round included both equity from its new partner, Block Communications Inc., a major US cable and media company, as well as a debt refinancing with The Toronto-Dominion Bank. The company was represented by Manulife Securities Incorporated’s Private Company Advisory group for both the debt and equity components. The combined financing results in an optimal capital structure, lower cost of capital and a significant investment for future growth. The company is poised for rapid growth through the continued expansion of its industry-leading Interactive TV experiences and its FAST (Free Ad-supported Streaming TV) service, called zone·ify.

“With its leading interactive service offering and exceptional leadership team, the future of Zone·tv is set up for exciting success. Block has a long history in media and communications and believe streaming and advanced capabilities are critical to industry success going forward“, said Allan Block, CEO of Block Communications.

The company will use its equity funding to advance its world leading interactive experiences that have been proven at scale, with customers and brands such as DIRECTV, Comcast, HBO, Warner, Discovery and many others. The funding will also accelerate the growth of its ad-supported streaming service, zone·ify. In addition to its thematic short-form dynamic channels, zone·ify will soon deliver thousands of on-demand tv shows and movies and even more content categories to be announced in the Fall. This enhanced customer experience, positions zone·ify for explosive growth in the emerging FAST market. Zone·tv is actively hiring sales, marketing & content professionals as well as software developers & engineers (https://www.zone.tv/careers/) to join its growing team.

“This latest round of funding will assist the company in enhancing its technology, content and marketing during the most disruptive and exciting time for entertainment.”, said Doug Edwards, Zone·tv’s Founder & Executive Chairman.

With customers like DIRECTV, Comcast, AT&T, Bell Canada, Rogers and many others, it has consistently delivered industry leading experiences, blending the traditional TV environment with apps and streaming before those terms were typically used.

About ES3™
ES3 is the leader in interactive application experiences for TV. Over the past 20 years, ES3 has delivered leading interactive TV products with top customers and brands through the most pivotal times in entertainment history. Over the years, ES3 has established customers relationships with Bell Canada, Bell Media, DIRECTV, AT&T, Comcast, Rogers, Microsoft, Intel, TiVo and many more. ES3’s one-of-a-kind interactive channel platform has been used by brands such as Game of Thrones, HBO, HBO Max, Discovery, Crave and more. ES3’s turn-key interactive pop-up channels, such as Santa Tracker / Holiday Countdown are world renowned and are delivered to more than 27 million TV households in Canada and the US. ES3 is the largest aggregator of subscription video on demand to pay television operators in the US and Canada, with over 18 catalogues and thousands of hours of exclusive content for distribution to pay tv under license.
ES3 is the parent company of Zone·tv Inc (zone·tv™).

About zone·tv™
Zone·tv bridges the gap between technology and engaging programming with its innovative technology solution offering a best-in-class, convenient and highly personalized viewer experience.  The zone·tv™ Studio suite of tools allows any video service provider to create personalized thematic channels with their own content. Zone·tv uses its own zone·tv™ Studio tools to create the zone·ify multi-channel video service – an unprecedented linear-like viewing experience, powered by A.I. Its proprietary software architecture combined with an 8,000+ hour content library has powered the company’s monumental growth. Zone·tv has become the largest provider of thematic subscription video on demand services in North America with more than 14 SVOD channels.

Get zone·ify directly on the App Stores or online at www.zoneify.tv

For more information about our company, visit www.zone.tv